To share your memory on the wall of Robert Gosa, sign in using one of the following options:

To plant a memorial tree in honor of Robert Gosa, please visit our Heartfelt Sympathies Store.

There are no events scheduled. You can still show your support by sending flowers directly to the family, or planting a memorial tree in memory of Robert Gosa.
Plant a Tree

We encourage you to share your most beloved memories of Robert here, so that the family and other loved ones can always see it. You can upload cherished photographs, or share your favorite stories, and can even comment on those shared by others.

Posted Apr 06, 2021 at 09:47pm
Dear Family,
All of the Administrators and Moderators at the American Legion Friends wanted you all know that we care about you and pray that God will bless you in the days ahead. We send you our prayers and condolences and this passage to honor Robert Gosa. May the Lord bless you and keep you.
LET THERE BE MEMORIES -- " fond recollections of special occasions and everyday things. Let your heart start on its journey to healing by feeling the comfort remembering brings.
LET THERE BE MEMORIES - pictures, momentos and favorite stories both funny and sad. Let your mind wander the paths of remembrance, reliving the joys and the good times you’ve had.
LET THERE BE MEMORIES -- signs that our loved ones remain near in spirit long after they’re gone...tender, surprising, heartwarming, and welcome...sweet proof of the promise that love will live on." (By Linda Barnes)

Posted Apr 05, 2021 at 09:34pm
Dear Family,
All of the members of the American Legion, from across the great state of Tennessees join me in extending our sincere condolences on the passing of your precious Mr Robert. It has been amazing to read his legacy of love and service to this great country, his family and the American Legion. All of us join together to honor a soldier for his faithful service as an important time in the history of this nation. May God now go to work to heal your hearts as you travel on a grief journey for a while. May He send 10,000 stories to be shared with the world. When you look at the list of service Robert took a part in I am sure there is an abundance of precious stories and memories of life and love and service. May our gracious God send 10,000 hugs because that is how many I have come to believe it takes to figure out a grief journey. May He now rest well from his labors as God lifts your spirits and brings joy to your hearts.

Posted Apr 05, 2021 at 08:28pm
What a great loss to The American Legion Family. Mr. Robert Gosa will be missed by so many people. He dedicated his life to his family, friends, the Legion and his work. Words cannot describe how sorry I am at his loss. What a great mentor !!! You are in my prayers. God bless you and your family.
Northern Area Executive committee woman
Bernita Barnett - Adjutant
James A. Long Post 207
Corinth, MS
Comment Share
Share via:
JM

Posted Apr 05, 2021 at 04:45pm
I respected Mr. Robert, he always was kind and respectable in all ways. He surely will leave a very large hole in our Veterans affairs for Calhoun County. May our God's Grace give you peace and hope during this hard time.
Comment Share
Share via:
RO

Posted Apr 05, 2021 at 03:03pm
Sarge was the best. All of The 595th loved His larger than life personality. Our Reunions will not be the same, He always carried the show. I loved Him and I think He felt the same even though I was a Yankee from of all places Massatoosetts. I will miss my friend. Richard J. O'Neil PS I'M not from the south but I got here as soon as I could!
Comment Share
Share via: 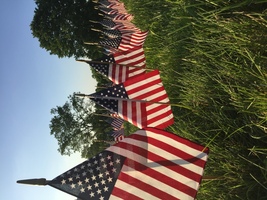